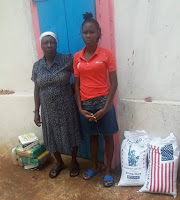 A thousand thanks to ORH for the 1000 dollar sent in response to my request on behalf of some people in my churches (Evangelical Church of the Redeemed) among the poorest.

The money served to provide 25 persons or families with a kit containing the items mentioned in the request letter. The updated letter had suggested that the number "30 persons " mentioned initially would go down when adding another essential element I had forgotten. Interestingly still, 25 families receives the kit even when I added an even more necessary item! 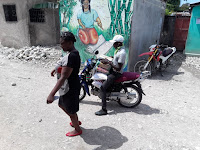 In fact, some of the beneficiaries, suggested, after consultation, that it would be better to drop the 3 cans of salmon, and, instead of a whole gallon of cooking oil, to give them half a gallon, so that they could get a box of laundry bar of soap. The box is about 5.5 USD.

Besides, you'll remark that I didn't take into account transportation. Not only I paid for taking the products from the store to the deacon's, I paid also to transport some kits to some church members in the countryside, in Lamontagne (the Hosanna Ministry has a small church in that place too).

Finally, I said I would give the kits to the women. Not all of them could be there. They sent either

their husband (with a taxi bike), or their son (strong enough to carry the items).

So, this is it, the money was served for relief for the intended entity. Not even the deacon or I got our share!

Again, the people and I want to express our deep gratitude for that help. And we wish it could be repeated, for there are so many people in need here. That's the main reason we didn't choose to do the distribution in the church facilities, because that would provoke the others to jealousy .

Thank you again to ORH!
If you have questions, please, don't hesitate to ask!

Joy and satisfaction over Operation Renewed Hope - Jan Milton in particular - for sharing in practical ways the love of Christ, touching so many lives around the world. I, Serge JACMEL, thank ORH again for responding positively to me in my former address about my brother-in-law, Noé Métélus, who had colon cancer.

Now, Frantzo Marmousette, Mrs. Fouchard Pierre, and I, are writing for some food relief for some people in our churches among the poorest. In fact, we are part of a big church - Evangelical Church of the Redeemed, which counts four daughter-churches. We are over 1 000 church members. As ORH is doing many actions in several poor countries to help, I am sure you are aware of the execrable situation (to say the least), which is the constant in such countries like Haiti. While it’s been about two months the virus is spreading in the country, and people can’t go to school, to work, or are hindered to go to the open market to sell or to buy… We haven’t gotten any help from the government, not even a mask! As Christians, it’s even worse for us.

So, seeing the posts by ORH about reliefs sent to other people in other countries, we dare hope you could send us some relief, even for the poorest among us.

Below are the list and price of items to make a food kit for one family (we consider giving it to the woman in the family).

Based on what is established above, we would need an equivalent of 39 USD for one family. So, with 1 000 USD, about 25 families can get a food relief kit like that.
In the hope that ORH will soon give us a positive response to our request, we pray that more abundant blessings be poured on ORH!