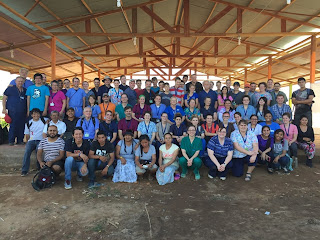 A group of eleven team members will board helicopters from a flight service, Helipan, based at Panama City’s Albrook air field.  The rest of the team will drive 4 to 5 hours into the mountains to fly from the area called Coclecito.

Helipan is supplying three helicopters for the mission to Barrera, a village on the northern coast of Panama.  Without the helicopters the village would be almost unreachable in a safe and reasonable time.  Pray for the costs of reaching these people with the gospel.

Please pray for the team’s success and safety as they attempt to strengthen the church in Barrera that was started by a pastor saved through one of ORH’s earlier clinics.

Due to the work in Hurricane Matthew and other disasters, ORH has been unable to send a report about our Peru 2016 trip.  The clinic was held in and around the jungle town of Puerto Maldonado.  The town is in the southeastern Manu jungle region due east from Cusco.

Buddy led us to refugee villages that spring up and then just as quickly may disappear.  Two such villages were a great blessing as we helped the sick and preached the gospel.  Churches are now going forward under Buddy’s direction.

It was also our privilege to work in river villages.  The ORH team returned to a river village which is the home of native Peruvian tribal people.  Our first clinic there over two years prior was successful, and the follow up led to a church and a building.  A missionary family now conduct services there.

A great blessing was the salvation of a tribal chief at this village in 2016.

Churches require pastors.  Please pray for this need.  Pray that ORH will have the necessary funds to help Buddy and Loren acquire, train, and sustain these needed young preachers.

Pray for the 900 people who were helped and heard the gospel.  Please download the PDF.