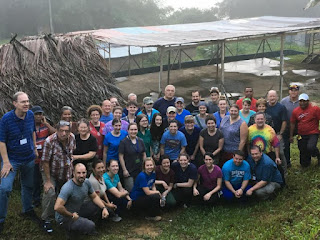 Thank you for praying for our 2017 Panama medical team that just returned.  Your prayers were answered.

The team members were our 2016 boot camp graduates from Berean Baptist Church, a group of young ladies from The Wilds Christian camp, a missionary from Peru, missionaries and workers from Panama, and several others from around the United States.  See the team photo on the PDF.

In the early days of Operation Renewed Hope, teams traveled exclusively to the country of Panama.  On one of those trips, the doctors discovered a young man, Eli, living in the jungle who was suffering from acute appendicitis.  Without surgery. Eli would die.  Arrangements were made to travel several hours on the ocean to a city to acquire immediate surgery for Eli.  The surgery was successful.

Eli eventually received Christ along with his family, and entered Bible training to become a preacher and pastor.

Eli’s village, and several other villages, enjoyed and benefited greatly from the team of medical professionals and non-medical workers.  All who ministered saw the Lord work mightily, not only for the Panamanian people, but also in their own hearts.  Despite heavy rains and high waters, the team treated at least 750 patients, and forty-two came to trust Christ as Savior.  Eli and his church will follow-up on these new converts.

ORH thanks our Panamanian missionaries, Jim and Phyliss Childress and Thomas Corbello, for their tireless work in developing medical missions in Panama and for others around the world.